OK, we’re having bicycles with us, but that doesn’t mean we have to cycle every kilometer. Especially if other (better?) alternatives are available to get around! So to get from Malaysia to Thailand, we discovered a nice route via the islands in the Andaman sea! 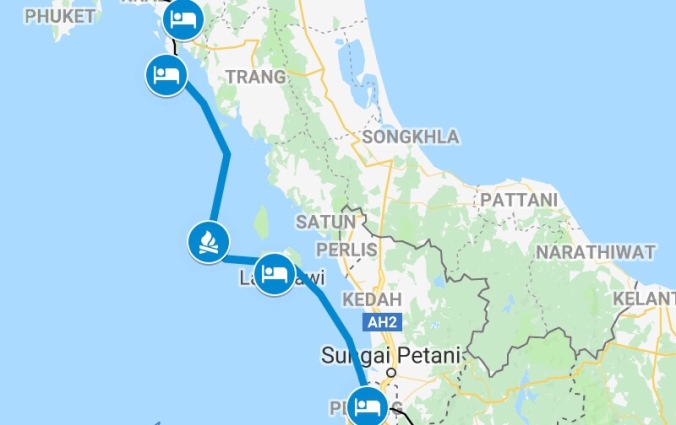 It all started with some research on the rainy season. Dave has always been interested in the meteo, and at home I often call him Frank (Deboosere – Belgian weather guru). He digged deeper into how the monsoon is travelling around South East Asia and it was coming down from Thailand to Malaysia, while we were going up. Our best chances to avoid it, was to travel via the west coast.

Luckily, on that west coast lies the Andaman sea, where you can find pretty islands so why not island hop our way up north!

Just a 20 minute transfer from mainland Malaysia and easy to get to on your bicycle alongside the scooters on the big ferry. And it only costs a few Malaysian Ringgits. There’s also a bridge connecting Penang to the mainland, but it’s a highway (with toll) so not that recommended by bicycle. 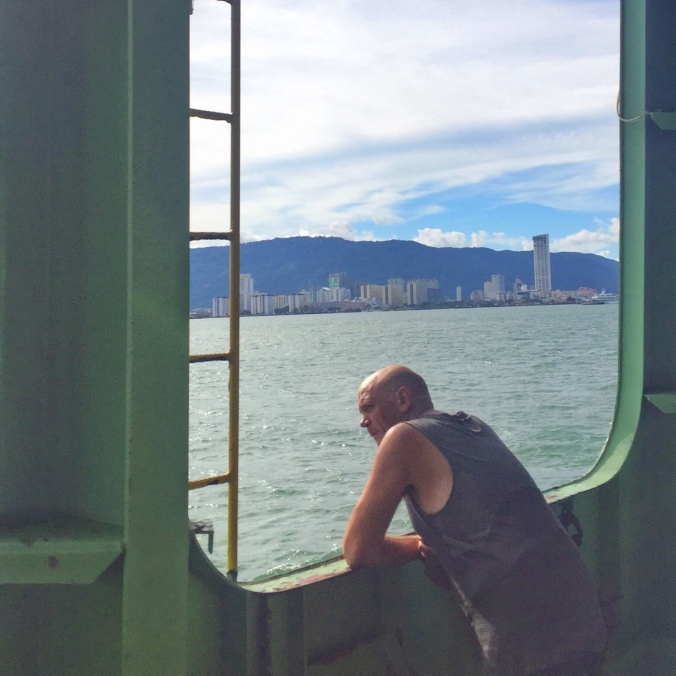 Ferry from the mainland to Penang

Penang doesn’t really feel like a tropical island with all the skyscrapers. Its main city George Town is big and bustling, and has a pretty Unesco protected old town and some streets where you’ll feel like you’re in China or India. But the rest of the island is one big contruction site. On the north side of the island, you can find a few beaches, but most of them are connected to a big beach resort (again skyscrapers).

2 times a day, you can take the boat from Penang to Langkawi. Only the one in the afternoon allows you to take bicycles (as in the morning, some other goods are transported on the boat.) It’s a reasonable sized boat and your bicycles are stored on the roof. Best give some fasterners to the boat crew who will take care of your stuff. Price: 60 + 30 Ringgits for the bicycle per person (about 20€) and it takes approx. 3 hours to arrive in the south harbour of Langkawi: Kuah Jetty.

Ferry from Penang to Langkawi

This is still Malaysia but it’s a completely different island that Penang. Lots of lush green nature, only low-rise buildings and many different beaches. And a lot of activities, both on water (parasailing, banana boats, snorkling, …) as on land (wildlife, bungee, waterfalls, a sky bridge, horse riding, …) to keep you busy. It’s also a tax-free island so if you’ re interested in alcohol and cigarettes, you can have a good and cheap time too! We stayed 3 nights in the very south near Pantai Tengah beach, a very quiet area with many good options in accomodation and food. I could definitely imagine staying here longer!

Just a little northwest of Langkawi lies the sea border with Thailand. The first island you come accross is tiny Koh Lipe, part of the Koh Tarutao National Park and Thailand’s most southern inhabited island. In Langkawi you can take a boat from Telaga Harbour Marina or Kuah Jetty. We preferred the first one as it was smaller (more relaxed to handle the transport of our bicycles) and a shorter boat trip. It costs about 30€ per person incl. bicycle, and during low season the boat goes once a day. Before departure you still have to pass by Malaysian immigration and hand over your passport to the captain, but that process went really smooth. We were a little stressed about our bicycles as Koh Lipe doesn’t have a real harbour/pier and everything has to be moved on a longtail boat to arrive on land. Let’s see how that goes… 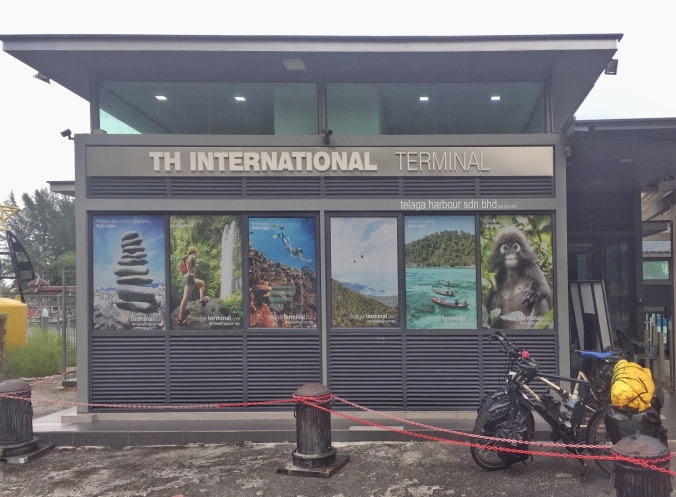 2 hours later, you arrive on one of the 3 beaches of Koh Lipe. We saw our bicycles being carried from the boat to the longtails to the beach. Just relax and let the boat crew take care of it! The Thai immigration office is by far to most relaxed border crossing I’ve ever seen. Feet in the sand, a friendly smile, a stamp, and you’re 30 days allowed into Thailand! 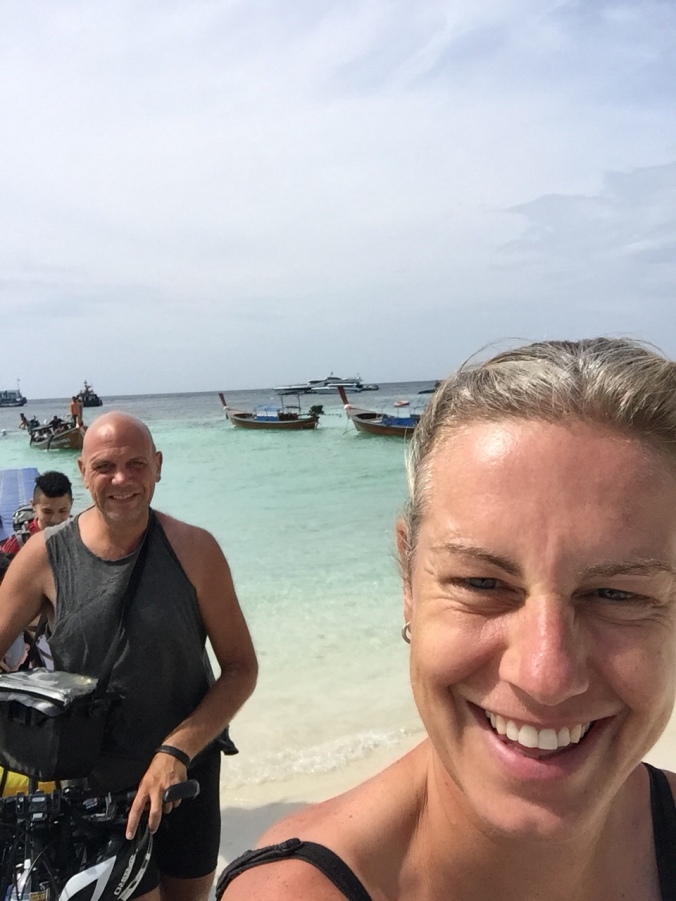 Happy to arrive on the beach in Koh Lipe

Koh Lipe is tropical paradise! Touristic, but paradise. 3 pristine beaches on walking distance of each other. Sunrise beach in the east, sunset beach in the west, and 1 Walking street in between where you can find everything you need. For us this mainly meant: delicious banana pancakes and a snorkling trip. But you can also find the typical thai massaaaaaaaage. Maybe it’s because of low season, but it was great to share the island, the beaches, the water, … with only a few other tourists (just enough to have it cosy iso empty). But unlike Langkawi, not a lot of cycling opportunities.

Best stop before going back to the mainland! You can get to all the Andaman islands with a speedboat, but we choose Koh Lanta because it was warmly recommended by our friends, and because it is connected to the mainland with a bridge and a short ferry (5 hours on a speed boat for approx 40€ incl. bicycle per person.) This would be (for now) the last boat adventure for us and our bicycles! 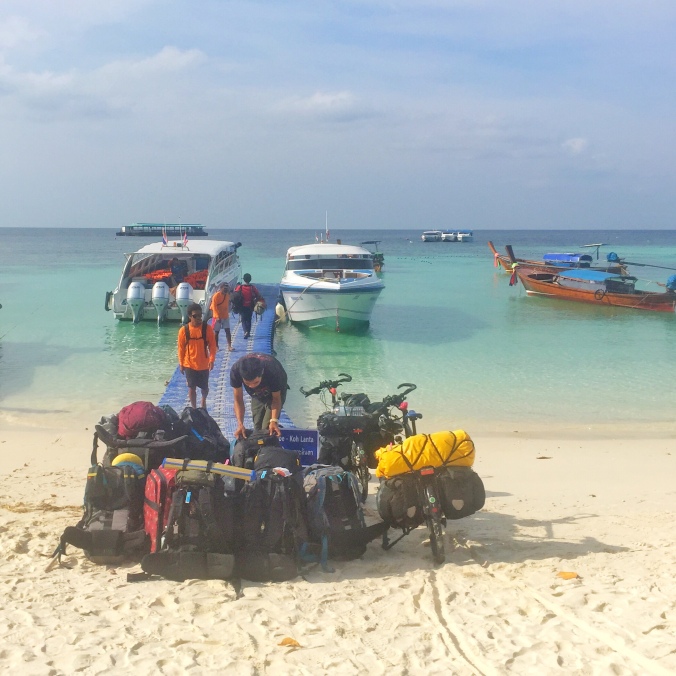 We spent only 1 night on Koh Lanta. We were too eager to start cycling again! And we already had some beach bum time in Langkawi and Koh Lipe. A quick ride by Ko Lanta’s old town and then to the mainland, up north!

Our tactics worked! We didn’t had a drop of rain while we were on the islands. Best proof was that it started raining (only small drips, but still) as soon as we checked in our first hotel after Koh Lanta. And we definitely got to see a very pretty part of South Thailand!

But even when we were island hopping in low season, it’s all very touristy though. We look forward again to see some more rural parts, this time of Thailand. To get to know the ‘real’ Thai way of living, the Thai people and the countryside!

!! Tip for when you spent quite some time on a boat: eat something fatty. Like banana pancakes. With chocolate sauce! Always keep you stomack full, putting a thin layer of fat on the inside. It will make you feel good instead of seasick! 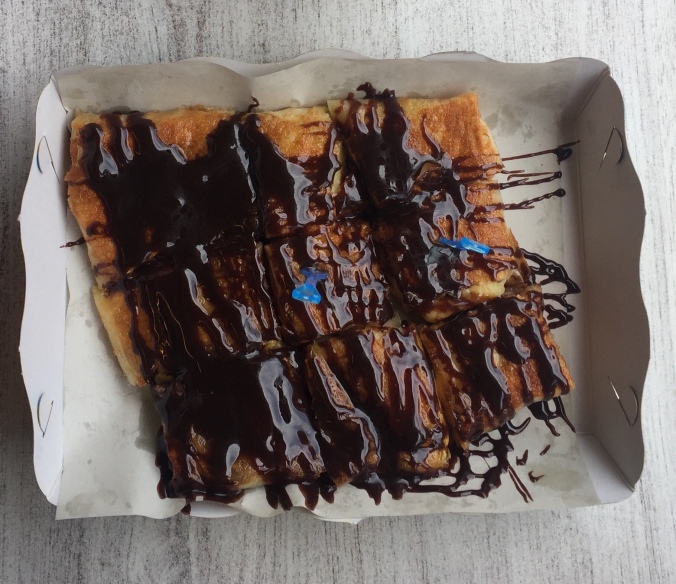